A Fresh Start: Alejandro Cooks Up a Better Future

At Father Joe’s Villages, we believe in the potential of our clients. Our sector-based vocational training programs, including our long-standing Culinary Arts Program, open the door to a new, hopeful future for individuals like Alejandro.

Shelter from the Storm 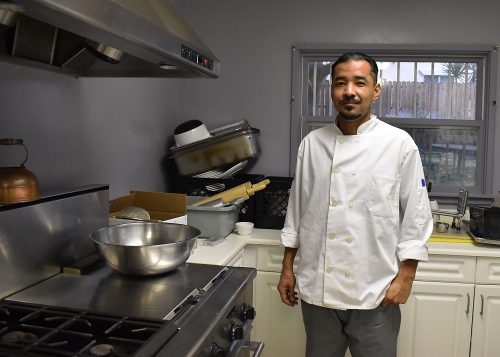 Alejandro poses in the kitchen of the Culinary Arts Program.

A San Diego native, Alejandro had been going to school to be a full time mechanic until his circumstances changed and he found himself having to survive on the streets. Each day he would rise with the sun and look for shelter and food, passing much of his time at Balboa Park or the Neil Good Day Center. “Surviving the elements was the most difficult part about being homeless,” Alejandro remembers. “Staying warm and finding places to be safe were the number one concerns.”

During his stay at Father Joe’s Villages, Alejandro’s chore was to clean the kitchen. He would stay extra hours after his shift.

“There was a lot of support and help I got here. And I noticed that. That’s why I put so many extra hours in. I just thought they were helping me, I might as well help them out.”

Putting in those extra hours paid off and eventually Alejandro was asked to chop food, work the line and even cook some of the Villages’ meals. “I got to know the cooks that way. I like learning, so once they started showing me certain ways that they cook, I really dug it. I wanted to learn more.”

That’s when Alejandro decided to enroll in the Father Joe’s Villages Culinary Arts Program (CAP), an extensive 14- week culinary training program. CAP not only teaches students the skills needed to work as cooks in the sought-after hospitality industry, but also the expertise required to apply for jobs and succeed in today’s competitive job market. 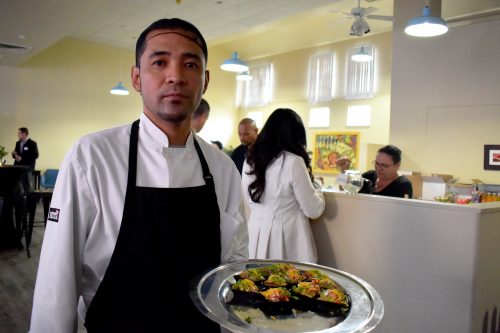 Alejandro helps serve the food he prepared with his fellow CAP students at Father Joe’s Villages’ Taste of the Village 2019.

In the CAP program, Alejandro found a passion for cooking and a new course for his future. During Thanksgiving, Alejandro made most of the 250 apple pies sold at Father Joe’s Villages’ Annual Thanksgiving Day 5k himself. It took him a week, mixing all the ingredients from scratch and creating each pie by hand one-by-one.

“Father Joe’s Villages changed my life by giving me an opportunity and support. I think that’s what I needed most in my life— someone just to say ‘you can do it. Just stick to it.’ I don’t know of any other place that does what Father Joe’s does.”

Currently, Alejandro is participating in a 6-month paid internship that Father Joe’s Villages offers through CAP, working in the kitchens at the East Village.

“I want to learn as much as I can about cooking. There’s always a demand for chefs or cooks. I could go anywhere.”

Alejandro plans to keep cooking and hopes to someday make a cereer as a chef. He is optimistic about where his new skill could take him.