At Father Joe’s Villages, we believe in providing a stable future for our clients. Our Skills & Training Enhancement Programs (STEPs) provide practical on-the-job experience to help our neighbors like Everett find jobs in growing industries. 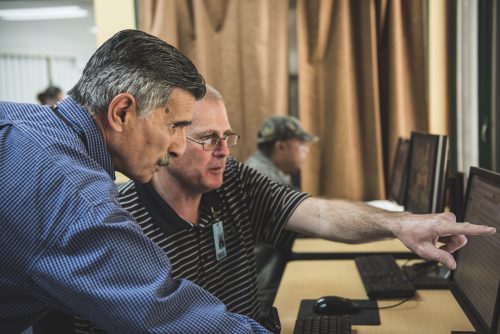 Everett lived with his wife and two children in Nevada where he worked as a skilled carpenter and construction worker for 13 years. He owned a small business specializing in the remodeling of restaurants, offices, homes and even custom sheds built to order. Everett was living the American dream until one day his wife blindsided him with a divorce. Shocked and devastated, Everett didn’t have the energy or will to contest the divorce. He walked away— leaving her with their home. He decided to move back to his hometown of San Diego, but once he returned he realized that most of his connections had moved on. This is how Everett found himself homeless.

For a while, Everett lived out of his car but was eventually unable to pay the registration on it. Once it was repossessed, Everett’s only option was to live on the street. “The street life is not comfortable and it’s depressing. These are not friendly streets.” Through word of mouth, Everett was told about Father Joe’s Villages. He decided to put his name on the waiting list and later moved into the Joan Kroc Center.

STEPs provide practical on-the-job experience to help clients find jobs in growing industries. The programs offer hours of training and mentorship, guiding clients through each stage of the employment process.

“Whether I was out on the streets or living at [Father Joe’s Villages] I just kind of refused to give up. So, when the STEPs program came along and I was offered the opportunity to do it, I took it. And I did the best I could with it.”

Everett’s first days in STEPs consisted of painting walls, which Everett couldn’t stand. He was itching to start building things again. He stuck with it, however, and always showed up to class early and stayed late. He was the first to volunteer any time help was needed. He even learned the trade of welding and how to operate a forklift. His favorite part of STEPs was the hands on experience, and his supervisor, Joe Ryan. Everett felt that Joe always listened to and supported him. Due to his background in construction, Everett was able to finish STEPs in a third of the time, making him the first ever STEPs graduate.

Even after graduating the program, Everett continued to come back to Father Joe’s Villages on a volunteer basis. “I wanted to give them a better idea of what my skills were and what my work ethic was.” Everett proved to be such an asset that Joe eventually took his supervisor aside and explained that they needed to hire Everett “before someone else does.” After interviewing, Everett was hired on to Father Joe’s Villages Facilities as a 3rd Level Technician!

In just a little over a year and with the help of Father Joe’s Villages staff, Everett attained a career, moved into his own apartment, and bought a car. He is now a role model to others living at the Village who aspire to gain what he has.

“I’ve been fortunate to take the opportunities that I’ve had and maximize them. A lot of other people living on the streets don’t have that same opportunity.”

Everett is thankful for his team at Father Joe’s Villages (consisting of his Supervisor, Case Manager, Housing Navigator and Counselor) who supported him through his most difficult time. He continues to keep in contact with each of them and always share the positive news that is going on in his life.

“It took me getting into Father Joe’s Villages to take the time to try to get my head straight. It gave me the ability to concentrate on other things like my resume and the job search. It gave me the freedom to think about other things besides just survival. Surviving is very difficult. Living is easy. Right now I am happily living.”