After she lost her husband and her housing and later became paralyzed, Father Joe’s Villages was there to help Rebecca stay housed and off the streets through our permanent housing program.

The Beginning: A Sudden Loss 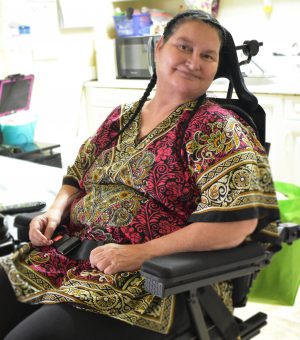 Rebecca has sustained housing for more than 12 years despite her serious disability.

Rebecca was planning to spend the rest of her life with her husband. However, he sustained a serious back injury and began experiencing excessive pain almost every day. One night, he took too many prescription pills and died of a medical overdose.

Reeling from the sudden death of “the love of her life,” Rebecca was thrown into a state of devastating grief. She became increasingly angry and depressed which made it almost impossible for her to function in day-to-day life.

Within two years, she was living on the streets. After months of homelessness, Rebecca was taken into emergency housing by Father Joe’s Villages. There, she worked with our Mental Health Services team who gave her tools to work through her grief. The Village Family Health Center gave her the medication she needed to combat her mental health issues.

A Turn of Events & Permanent Housing

In 2006, after transitioning to permanent housing at Father Joe’s Villages’ Village Place Apartments, Rebecca awoke to a nightmare.

“I woke up one morning and couldn’t walk. I was fine one day and the next I couldn’t move. It was so sudden.”

She was rushed to the hospital where she was told by doctors that her cerebellum had shrunk.

“I was going to have to learn to talk, eat and walk all over again.”

After being released from the hospital and returning to her apartment, Rebecca needed 24-hour emergency care. Over the years, our Tenant Services staff has helped her apply for Section 8 housing, assisted her with interviewing in-home support candidates and provided in-home psychiatry and therapy. Intensive support from Father Joe’s Villages staff has helped Rebecca push through her difficulties and has ensured her continued independence.

Rebecca is still confined to a wheelchair but, slowly and surely, she learned to eat and talk again. She is thankful for all the life-saving resources provided by Father Joe’s Villages. Despite her severe disability, Rebecca has remained stably housed for more than 12 years thanks to Father Joe’s Villages’ staff and programs.

Donate today to support permanent housing for neighbors in need >>