“From the Streets to the Stage:” Mark’s Incredible Journey

When Mark, a veteran Marine with a chronic illness, became homeless, Father Joe’s Villages was there to provide targeted support through comprehensive services and affordable housing programs to help him to get back on his feet. 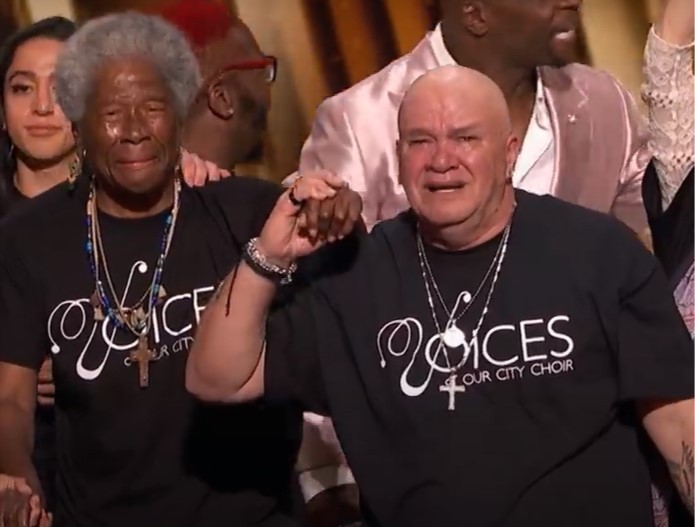 Mark was overcome with emotion after the Voices of Our City Choir were honored with the Golden Buzzer on America’s Got Talent.

If you had told Mark while he was living on the streets that he would someday perform on one of the most popular TV shows in the country, he would have thought you were joking. However, after overcoming his battle with addiction and his struggle with homelessness, Mark found himself center stage on the talent competition show “America’s Got Talent.”

Performing with the Voices of Our City Choir, which was formed to help people experiencing homelessness in San Diego, Mark and his fellow choir members sang an inspiring original song called “Sounds of the Streets.” The song moved host of the show, Terry Crews, so much that he awarded them with the season’s first Golden Buzzer, an act that immediately advances the Voices of Our City Choir to the show’s semi-finals.

To Mark, the experience of overcoming homelessness and then appearing on a national TV show is indescribable.

“I have been so blessed these days with the Voices of Our City Choir. This has surely been a long time coming for us all. This has been such a journey for me and I am so humbled by our success.”

Mark’s Journey Out of Homelessness

Mark’s journey to success wasn’t easy. Just a few years ago, after Mark was diagnosed with Multiple Sclerosis, he struggled to pay his medical bills. Then, after suffering from a stroke, he lost his home. With no other options, Mark was forced to live on the streets of San Diego.

Sleeping on the hard ground and enduring the elements of being outdoors made Mark’s battle with MS unbearable. Knowing he would not survive being homeless, Mark sought help from Father Joe’s Villages. In 2018, Mark moved into the Bishop Maher Center, a transitional housing facility for single men, and began receiving care from Father Joe’s Villages’ Services for Veterans.

Through our comprehensive services and support from case management, Mark gained tools for maintaining his sobriety, securing benefits, learning financial responsibility and managing his illness.

“When they opened the door I fell to my knees crying. I was so incredibly overwhelmed. The path of faith sometimes gets trying. You sit there wondering ‘How long?’ ‘How much more?’ and then finally walking into my new home… It was indescribable.”

After finally settling in a stable home of his own, Mark was able to focus on his passion for music and his love of the Lord. He became a member of the Voices of Our City Choir, singing and playing guitar alongside others who once called the streets of San Diego home. He also recently went back to school where he is currently earning his Master’s Degree in Christian Ministry.

Through his church, Mark now goes out and gives blankets and other necessities to people on the streets, some he recognizes from his time out there. However, Mark sees that, with the right resources and some hard work, a brighter future is possible for people experiencing homelessness. He credits Father Joe’s Villages for providing those resources to him, as well as instilling in him the strength to build a better life.

Are you looking for resources and shelter in San Diego? Check our Get Help page here >>