Homelessness can happen to anyone.

Many people living in San Diego are only a few paychecks away from becoming homeless. That’s why Father Joe’s Villages is here to provide services and programs that move people off the streets while they get back on their feet. John, a smart and skilled professional, was one of those people.

Homelessness Can Happen to Anyone 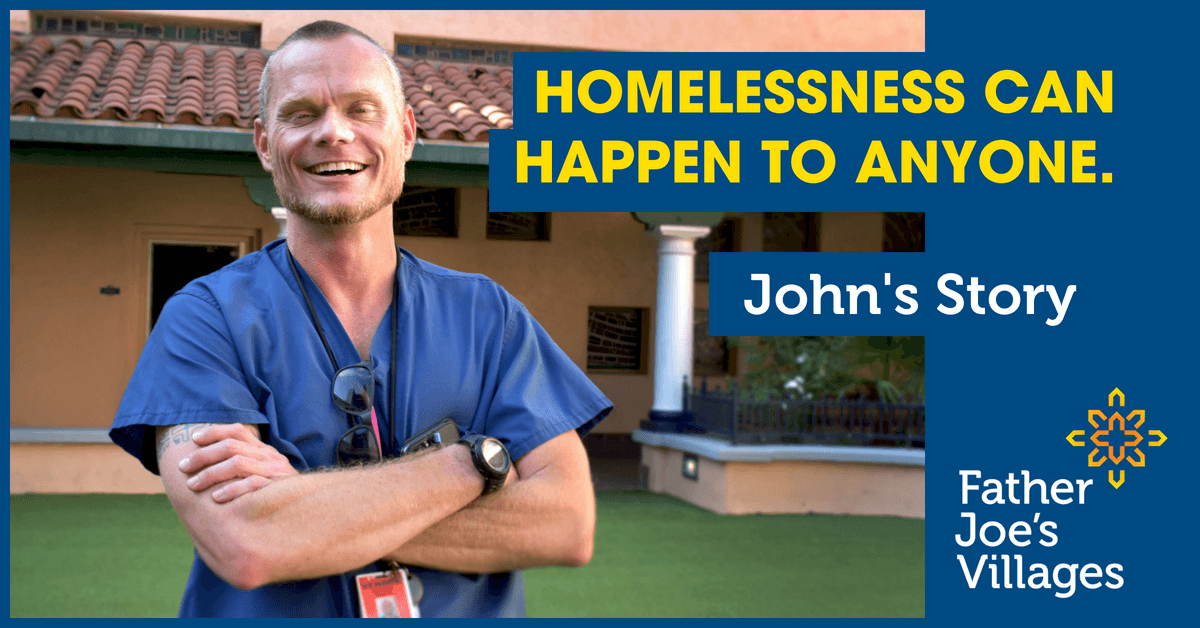 John was the National Artistic Director for a large corporation. With an entrepreneurial spirit and $15,000 in savings, he decided to go out on his own and start is his own business. He had a strong start but overhead was high and John wasn’t able to turn a profit quickly enough, working through his savings.

“Before I knew it, I had lost everything,” he said. Eventually, John became evicted from his apartment. Even his car was taken.

Without a support system to fall back on, John became homeless.

“Sleeping on the street was the most difficult part. I slept in a lot of stairwells and things of that nature.”

Hungry, exhausted and scared, John attempted to work his way out of homelessness. However, after working for the same company for many years and then being self-employed, he wasn’t prepared for the modern job market.

He found employment wherever he could and held a steady job for a while—borrowing work clothing from other people on the street. But, the minimum wage job wasn’t enough to afford housing.

Unfortunately, the vacancy rate for apartments renting for $2,000 a month or less is 2% and only 3% of rental units in San Diego rent for $700-$1,000 per month. The San Diego Housing Commission’s 2017 Housing Report reports that 50% of San Diegans can’t find market-rate rental housing they can afford.

After three months on the streets, John came down with pneumonia and ended up at a health center. They referred him to Father Joe’s Villages.

He was welcomed into our Transitional Housing program, where he found all the resources he needed to get back on his feet.

“The support system here helped me believe in myself and find myself again. For four months I was feeling sorry for myself. My case manager taught me that I was worth more than I was allowing myself to be.”

He was especially grateful for the Employment and Education Center and its Program Manager, Ray, who helped John prepare for his future.

“They taught me how to do my resume. My resume was awful. I didn’t even know where to start. I went over and spent time with Ray and Ray taught me a lot about how to build a resume and how to use the internet in a more effective manner; how to use email the short way; how to take my resume and put it on a desktop. The whole process of doing my resume…that was the day that turned everything around for me. I do have experience and background,” John realized. “

After regaining confidence in his skills, John concluded that he wanted to use his career to help others. He found work as a caregiver, while also going back to school to become a medical counselor.

He thrived in school, earning a 4.0 and perfect attendance. This paved his way for an externship at a prominent health center in San Diego, where he was later given a full-time job.

Last month, John was able to save up enough to move into his own apartment. 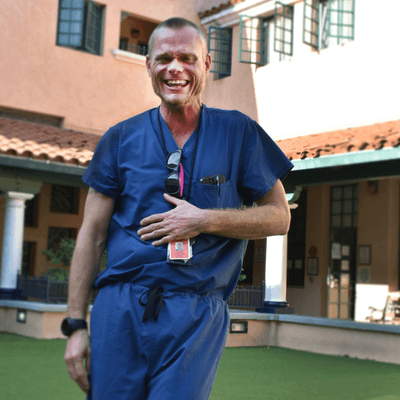 “I’m doing good. I can’t believe it. When you go from nothing; when they drive up and take your car from you…And I have no family, no friends, no nothing. If you’re ready to do it yourself and to change, then [Father Joe’s Villages] will help you. You have to be ready to change and understand that the end goal is to be better than where you are right now.”

Not only that, but John is also well on his way to achieving his greatest dreams.

“I’m going to make a difference in this world… I would love to help people like [Father Joe’s Villages] helps people here. Who knows what I’m going to end up doing. The sky’s the limit.”

John also wants people to learn from his story. If there’s one message John wants you to take away, it’s this:

“Don’t give up on people. Everyone goes through stuff and it’s temporary. Eventually, they’re going to find their way… Father Joe’s Villages gives you all of the opportunity you need to be better than ever before.“